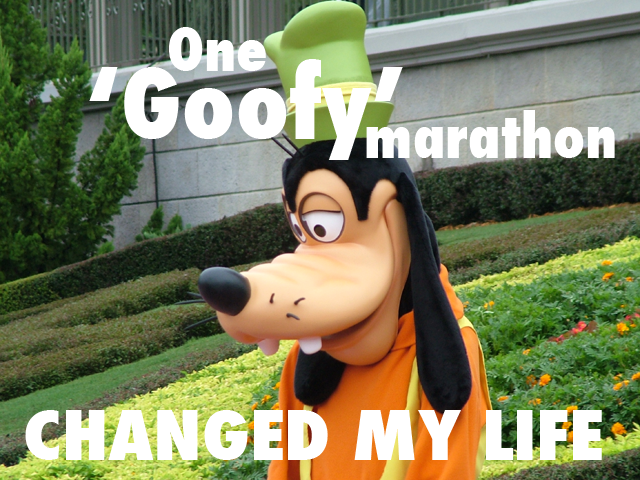 One ‘Goofy’ Marathon Changed My Life

This is a story about a woman who ran her first marathon at the age of 50.

My waistline began to thicken way before my 50th birthday. Years in a high-stress (cortisol!) desk job caused my belly to protrude above my snappy black dress pants. I worked a 50+ hour workweek, took care of my way-too-busy daughter and kept a 6,000 square foot home running like a top. Without a housekeeper! My husband did more than his share but he too was exhausted from his demanding career.

But back to the waistline, my vanity was really hurting. I had always been a petite woman that never looked her age. As I approached 50 I began to both look my age and I became a regular suit buyer at Ann Taylor. Things were not moving in the right direction.

I had also began noticing those (mostly) slim runners on our city streets, clothed in Nike with their pony tail perfectly tucked into their cute hat and secretly wished I could be THAT. I was not an athletic person. Never had been. Not in high school, not in college – NEVER. My idea of exercise was vacuuming. So to decide to sign up for a Learn To Run class was, well, daring. Crazy actually. But I was desperate. I wanted my figure back. And I wanted to continue to drink wine so something had to give and it was not going to be the Cabernet.

For my 50th birthday I gave myself the aforementioned course at a local running store. I bought the cute outfit and showed up Starbucks in-hand. I looked around and everyone was younger than me but I was not about to tell THEM I was a half century old so I nodded a great deal and set out to learn how to run.

I sucked. I was the slowest. I was the last one to come in when we all went out for our runs. I was nicknamed “the sweep” because I would catch all the stragglers and bring them home. “Slow and steady” I kept telling myself but my ego was taking a beating. But, I persevered. I secretly loved it when the trainer would call us “runners” or “athletes” during the class. I had never had those adjectives used on me before. It was a little exciting. It made me forget the embarrassment of coming in after everyone else had gone home.

One day, the trainer asked a fellow runner to come in and show us the medals from all his many races and give us a pep talk about running. I sipped my Starbucks from the back of the room and adopted an air of “whatever” while trying to hide my rapidly beating heart. “They give you medals?” “Just for running?” “You don’t even have to be fast and they still give you one?”

Then he pulled out the medal that was to be the game changer for me: A giant, gold Goofy. That’s right – that gawky Disney dog with a weird voice. I LOVE DISNEY! Tell me more!

It turns out Orlando Disney has a marathon weekend in January where you can choose your distance, run through the parks and get a medal. ARE YOU KIDDING? What do I have to do?

Well, that was the catch …

The half marathon held on the Saturday is called the Donald Duck. You have to run 13.1 miles to get a giant gold Donald Duck medal. Ok … get to the dog please.

The full marathon held the next day is called the Mickey Mouse. You have to run (you guessed it) 26.2 miles to get a giant gold Mickey Mouse medal. Nice, but ok …

If you are insane enough to run the half marathon on Saturday AND the full marathon THE NEXT DAY, they give you a third medal: the coveted Goofy. If you are following the numbers, that is 39.3 miles over 2 days.

This medal is aptly named. You have to be a goof to even consider it.

It was August. I knew I could not perform this feat in 5 months (I hadn’t run 3 miles yet) but I most certainly could run it the following year! In my naïve and inexperienced enthusiasm, I assumed that if I trained for a year I could do it. The runner at the front of the room entertained my questions with a healthy dose of skepticism mixed with regret over what he had just introduced to my hyper-zealous mind.

I am not easily daunted.

I put together a week-by-week plan. It detailed how many miles, how many times a week I had to run. I peppered in a few races in between to insure I was on track and the second of January I put down the hefty registration fee. I researched it and they have over 9,000 people attempt the Goofy every year and no deaths reported. How bad could it be? It’s Disney! They know what they are doing and no one dies at Disney! My reasoning was solid and so I began the training. 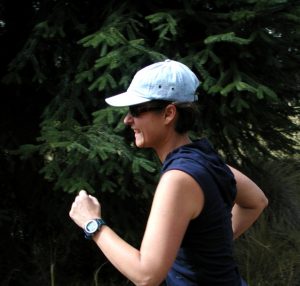 I’ll spare you the details of the yearlong training program. I won’t tell you the number of people who told me I was crazy. I will leave out the blisters, the black toenails, the skinned knees, the plantar fasciitis and the chafing. Hundreds of miles were covered and much Gatorade consumed. The running through rain, snow, sleet and summer heat will go unmentioned.

But I will tell you that it changed my life. It forced me to get up early, run when I didn’t want to, eat what I needed to fuel my body. I had to deal with limiting beliefs and self-doubt and all kinds of crazy thoughts. I had to face my demons and deal with myself. I had to run through discomfort. I had to ask God for help. Running does that.

The day finally came. It was a very cold Orlando weekend and I stood at the starting lines shivering with excitement and fear. The gun went off, the music started and in the typical Disney fashion, there was much fanfare and fireworks. I almost peed myself.

But when I crossed the final finish line, I wept. Then I stood tall as they put the Goofy Medal around my neck and I knew there was nothing I could not do. NOTHING.

Oh, and guess what? There were an awful lot of people that came in behind me. I was no longer “the sweep”.

Diana is a Holistic Life Coach, Business Alchemist, marathoner and luminary. Through these pages she inspires a tribe of fellow luminaries. Raised in South America and the USA, she split her time between Florida and Toronto, Canada. Happily re-married to her husband of 26 years (long story), she travels, paddle boards, golfs and enjoys early retirement. Connect with Diana on her website.